My family has always known a simple fact about me from my childhood, one which my mother always called "my kicks". The way she would describe it would be my new interest or fad, something that a week ago I wasn't interested in, but now can't stop talking about.

Whether it was having 6 Eggo Waffles for breakfast every morning that one high school year or the few months that I just had to have bagel bites after sports practice, the fads came and went. It wasn't limited only to food though, because back then learning all of the character frame rates on Diablo II or memorizing Fresh Prince of Bel Air episodes were kicks too; but, to her, it was just something that made me, well, me.

These new interests still happen to me today. Even now I'm on my third week in a row of making no-bake cookies as a snack, while reading through Joshua Kennon's blog articles again! This tendency has been advantageous in some regards:

Number one - Coach Proctor and Coach Smooth used to say - "If it ain't broke don't fix it!"

Put in another way, reading through the Inheritance Cycle for the fifth time or Josh's blog articles for a third, doesn't change the fact just how fantastic both are. They both still have substance to learn lessons from!

Number two - Reading or watching videos that contain useful information for life isn't the worst thing to watch multiple times. Unfortunately, this isn't always how it works - my grandmother had to once ask me not to put Avatar in again one summer during college. When a movie makes history and new technology all in one go, it's hard to let it go. Alas, I eventually did.

Lately, I've been watching Charlie Munger's speeches on YouTube again, and it felt like this was worth sharing with anyone who happens to cross paths with the blog (or my awesome subscribers!!). 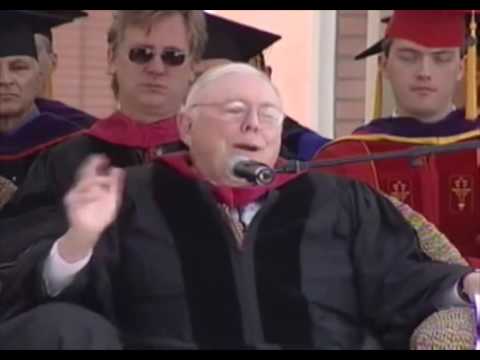 Does the name ring a bell? I wrote about Charlie's advice on keeping friends in the past!

From Charlie: Two Things to Avoid in Life

His children have often called their father a book with two legs accredited to his avid reading habits. I've read quotes from people who he had business meetings who stated that not only was he always on time, but he happened to be early too. There he would be waiting for them to join him with a book in his hand!

There are many many nuggets of wisdom throughout this speech: mental models, inversion, worth ethic, learning from those who came before you, and more!

Looking for something to do this weekend?

Put your headphones on, click on the image above, and enjoy wisdom with nature as you increase your health for 40 minutes. I sincerely believe it will be worth it!